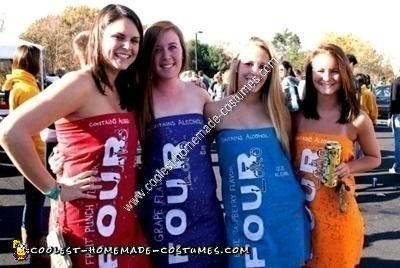 Inspired by one of the most popular alcoholic beverages amongst college students in 2010, a one of a kind homemade costume idea was established. This Homemade Four Loko Group Halloween Costume sure was the talk of the town after being worn to the Homecoming football game, parties, and bars, winning two costume contests, and being published in the Towson University Towerlight newspaper. We were celebrities for a day!

These Four Loko costumes were created in about six hours of work using three inexpensive materials: fabric, paint, and ribbon. First, measurements were taken in order to appropriately size the “can” for each individual. Once accurate measurements were taken, it was time to start splatter painting! The material was laid outdoors and once completely covered using the splatter paint technique, it was time for it to dry.

While waiting for them to dry for about an hour, “F-O-U-R” was drawn onto material and each letter was carefully cut out. Once the “can” material was dry, the letters were pasted onto the “can” using a hot glue gun. Further details such as “Loko,” flavor, and alcohol content were hand drawn with 3-D fabric paint (puff paint). After the entire costume was dry, it was secured onto each individual’s body by wrapping it around in order to resemble a dress. To hold the costume together, small holes were cut and strung with ribbon.

To complete the outfit, tights were worn; the color of tights coordinated with the flavor. 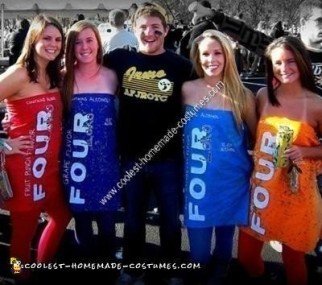 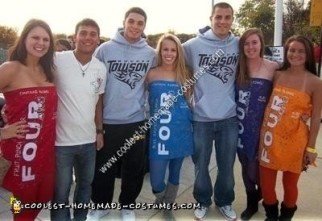