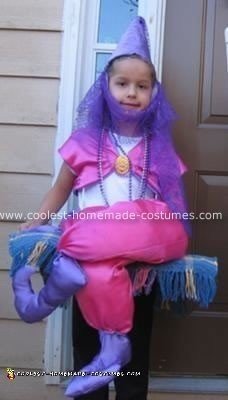 This Homemade Flying Genie Halloween Costume was relatively easy to construct. The rug was held rigid using chicken wire tacked to the bottom. Old belts under the clothing made a harness which held the rug around the waist. Make sure to keep the wire edges covered with duct tape or they will scratch.

To balance the fake legs, a treasure box was tacked behind the genie. We filled it with old jewelry. The legs were filled with plastic grocery bags to keep this light weight.

The costume itself was made by using a children’s clothing pattern. The shoes and hat were constructed by drawing a pattern, sewing this together and stuffing them with plastic grocery bags. If you are not into sewing, finding clothing parts at a thrift store is cheap and easy. The hat is easy to make and can be made of cardboard and painted or fabric glued on.

The arm in the cast was not part of the original costume idea.