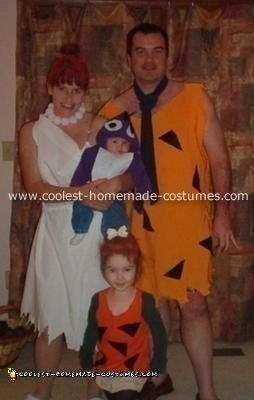 The family decided to do the Flintstones, so we were Fred, Wilma, Pebbles, and Dino Flintstone.

FOR Fred, I found an old white laundry bag that I dyed orange and then pasted black felt triangles on it…and cut holes for the head and arms…and a jagged bottom.

FOR Wilma, I bought a white sheet and cut a jagged bottom… and wrapped it around myself and held it with safety pins. The Wilma necklace is just Styrofoam balls I bought at a craft store and held together with a needle and thread. I also sprayed my hair red.

FOR Pebbles, I just took an old orange shirt that I found at a thrift store (bought it 2 sizes too big for my daughter) and then just turned it inside out (so you wouldn’t see the picture that was originally on the front), cut the sleeves and neck, and pasted felt triangles. She has a green leotard underneath (in case it got colder on our adventure trick or treating). The pants are just shorties that came with one of her dresses… and she has tights on and red hair spray.

FOR Dino, I just found an old purple hooded sweatshirt and glued a white felt belly and eyes on the sweatshirt/hood.