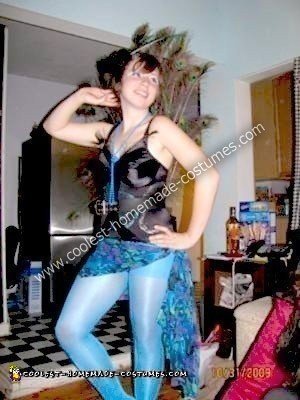 I first started this Homemade Flapper Gal Style Peacock Costume by buying lots of feathers from Michael’s. For the tail, I got about 20 long eye feathers and glued them on to a half circle of cardboard in a fan, decreasing the size of the feathers going toward each side to make it round, without being so long to hit people when I walked.

I spray painted the cardboard black, and then bought a large, sturdy belt and hot-glued the tailpiece to the inside of it. I also sewed the cardboard around the belt a bit just to make sure it stayed on.

I then made a bow out of some wide black and thin turquoise sheer ribbons and glued them on the opposite side (to cover up the ugly cardboard and add some balance to the tail) and glued some iridescent feathers in random parts of the bow, plus three peacock sword feathers pointing down, opposite of the rest of the tail.

For the headpiece, I took a large alligator clip and glued two different sized sword feathers on it, then made another black bow similar to the other and again, added a couple dark iridescent feathers.

For the main body of the costume I bought a silk bodysuit from the Salvation Army and got some glitter glue (from Micheal’s) and painted some swirls on it. I hot-glued two short eye feathers to the top of the chest. I bought bright blue tights from American Apparel and had a blue/purple scarf from Sally Ann to tie around my waist.

On my feet I wore green boots and for my makeup I painted my eyes black and white (similar to a real peacock’s eye markings) and added some sparkles to my face.