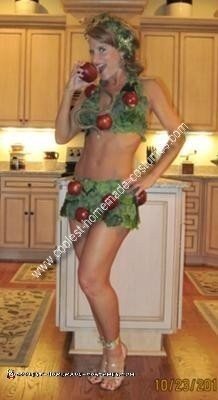 I had wanted to be Eve for a few years now, but the store-bought costumes weren’t elaborate enough for me! So I started this Eve Costume with an inexpensive green, skirted bikini. I bought picks of assorted leaves and ivy from the local craft store, clipped the leaves off the picks, stood in front of a mirror and pinned different sizes of leaves all over the bathing suit until it looked finished. It was kind of like putting a jigsaw puzzle together.

I then used invisible thread to sew all the leaves on by hand (this is basically fishing line that is thin enough to thread through a needle…it comes on a spool just like regular thread, but its very forgiving on costumes because you can’t see it, so you can afford to be a little sloppy. The only thing, though, is that it can be a little itchy).

I then took apple halves that I had found in the craft store (they were flat on one side and 3-dimensional on the other) and hot glued them all over the suit. Added a vine of ivy in my hair, another fake apple to hold, a really realistic fake snake around my neck (I found him online), gold sandals, and VOILA! Eve was “born”!!