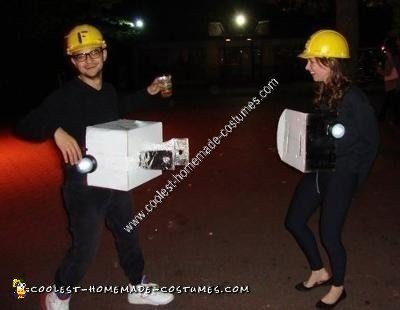 The idea for this homemade electricians couple costume evolved through several phases. Initially we thought we would be Chilean miners wearing hard hats and the green jumpsuits. However, our “jumpsuits” were going to be dyed green, size XL 180-230 lb Home Depot painters suits. We really needed to let the creative juices start flowing again.

Looking for a new idea, we landed on the ‘plug and outlet’ costume. But when we went to get supplies, we decided to spice it up a bit. The plug’s prongs were made of cardboard covered tinfoil, and actually fit into the 3D socket. We attached battery powered push on lights to the sides of each the plug and outlet so that an electric connection between plug and outlet produced REAL LIGHT!

When we got back from the store and saw the hard hats from the original miners costumes, we still REALLY wanted to wear them. So we worked them into the costumes, landing on our final idea: Electricians!

We wore these to a Halloween event at the National Zoo. We had way too many strangers at the Zoo and on the DC Metro asking us to ‘hook up’ so they could take a picture of our electric connection!!