Our 8 year old son decided he wanted to go as a Lego man for Halloween this year and thankfully with enough time for us to make it. This is the first and hopefully (not likely) last costume we’ve ever made. It took us from the beginning of October right up until the day before Halloween. We used a lot of cardboard and duct tape, some Styrofoam, Velcro straps, nylon fabric, and paint.

The most difficult parts were making it easy enough for him to walk in and cutting and sanding the Styrofoam. We made the Lego legs into boots with closed in bottoms but when walking in them they tended to knock into each other and trip our son. So we added Velcro straps that attached to a belt to help hold the legs in there place. We also put Styrofoam in the legs to make them fit tighter and be less floppy.

Cutting the Styrofoam took us six attempts to get a piece we hadn’t broken in half. We had to get it to be just the right size that it fit around our son’s head but the outside also lined up with the Lego head. While getting frustrated at the Styrofoam not doing what we wanted, we had to deal with our cat attacking every piece of foam and cardboard she could get at. Needless to say, our house was a disaster all of October.

At the end of it all, our son loved it along with every other kid that saw him. Little kids were in awe, wanting to just hold a life size Lego mans hand. It’s a good thing when walking in the costume he was so slow because it gave all the kids time to look at him. At one point in school I had debated putting him on a dolly and wheeling him up and down the hall. Lol! 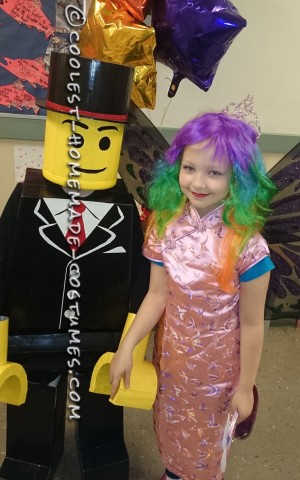 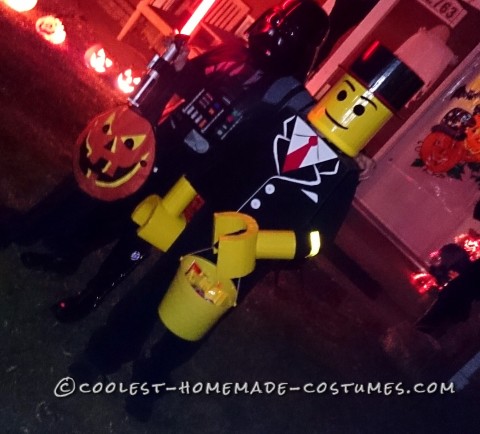