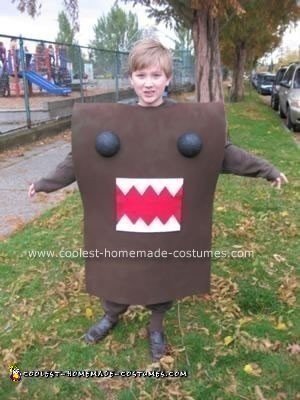 My son insisted on being Domo this year despite my protests that it would be too difficult to make and too difficult for movement or vision. I originally looked online and saw that some people had put a full box over their heads to create the character and I really didn’t want to limit my son’s vision like that.

With that information, I bought 2 yards of spongy foam (1 ½ inches thick) from Joann Fabrics. I then folded it in half and cut a slit at the fold for a head hole. When I slipped it over my son’s head, he requested that I cut the front of the hole so he wouldn’t feel choked, so I rounded the slit out a bit in front.

I then bought dark brown spray paint (Krylon for plastic) and covered the whole thing. I recommend you paint the sides and the neck-hole too because I had to touch that up later. After it dried, I applied the eyes which were 2 styrofoam half-spheres painted with black acrylic paint and covered with a clear coat of spray paint to protect them. I bought pre-cut felt in red and white to make the mouth. I actually measured my son’s Domo character to get the proportions right. I used a low-temp glue gun to attach the eyes and mouth. Finally, I used foam glue to glue the sides together, allowing plenty of room for arm holes.

I bought brown sweats at K-Mart, brown shoes from Value Village and had him wear some of my brown socks. I tried to dye some white mittens brown, but, since they were acrylic, the color didn’t take so he went with nothing over his hands.

One side ripped open after he fell while trick-or-treating and it was hard for him to go upstairs, but otherwise he loved this costume. All of his peers went nuts for his homemade Domo costume, but some adults thought he was burnt toast or a sandwich.