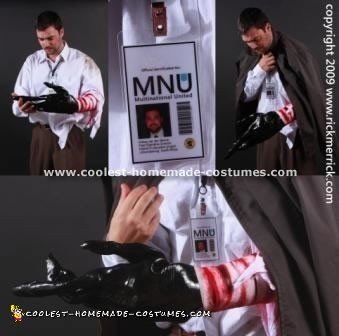 Initially, I didn’t know if I could pull off the “prawn arm” from the movie but I went to my local Halloween store and found the perfect gloves to get me started. First, I cut out the middle finger on the glove to bring the number of digits down to three (on these particular gloves, the ring finger and pinky finger are already joined together) so removing the middle finger was the logical choice. I sewed the gap together using black thread then glued E6000 on the inside to ensure the seam would hold. Next I painted the entire thing in black liquid latex. That made a huge difference, changing the appearance from brown, skin-like human hands to jet black, shiny, wet-looking and alien-like!

I shredded the coordinating sleeve on the long-sleeve button-down shirt. I wrapped medical gauze around the top of the prosthetic and used red and black acrylic paints on his clothing and the gauze to give him that “fresh off the experimental operating table look”.

The finishing touch to this costume is the MNU ID badge which I made using GIMP. I had the badge printed and laminated at an office supply store.
I worked on this costume over several days but I probably put about 3-4 hours total into making it and we were all really pleased with how it turned out!

The Libyans from Back to the Future in Their Van