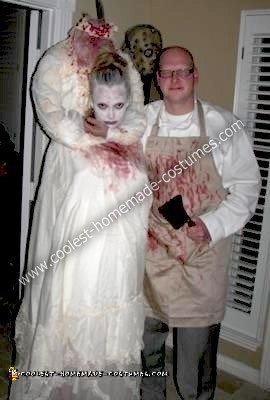 I got the idea for these Homemade Decapitated Bride and Butcher Costumes from your site (thank you!) but wanted to make the “execution” a bit easier than molding my bust, etc. I found the dress at a local thrift store for about $12.00 so the costume ended up being very economical to make.

For the body I went to my dry cleaner and asked for a form hanger, which is basically a piece of cardboard formed to look like a chest. I took the metal hanger out of the form and covered it with a long-sleeved white tee shirt. I then placed the handle of a rolling backpack inside the form and stuffed the form and the arms of the tee shirt with poly-fill. I tied the bottom of the tee shirt to keep in the poly-fill and voila I had a very light and easy to make torso.

I cut a hole in the dress for my head and then put the dress on the torso. I cut up the veil that came with the dress and used the headpiece as a “choker” to hide where the neck would have been. I used one of those sleeves that you can buy to make it look like you have a gaping wound on your arm for the neck. I simply left the sleeve on the cardboard bent it around to make a circle and then moved the wound part up to the top rim to make it look like cut flesh and stapled it to the cardboard form under the choker.

I strategically applied a tube and a ½ of fake blood to the dress and let it dry overnight. I used one of those fake hands that you can place under a door or out of a trunk for the hand and pinned it up to make it look like it was holding my head. I don’t know how much the hand cost because we’ve used it for years as a Halloween decoration on our porch.

The costume was a hit at the party we went to and it was fun and easy to make! Though the form I made was pretty light and the end product didn’t weigh too much, my neck and back did hurt by the end of the night because of the unnatural way I had to hold my neck. Other than that it was a great costume.