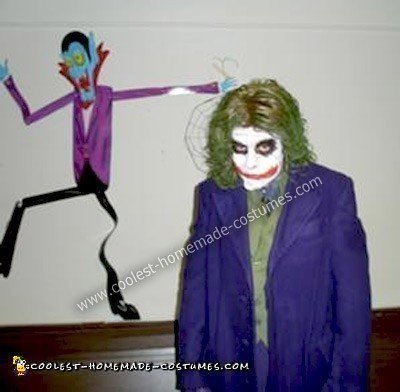 I decided to wait a year to go as Heath Ledger in Christopher Nolan’s interpretation of The Joker, seeing that everyone chose this costume the year the “The Dark Knight” came out. My Dark Knight Joker costume took a year to put together as I started looking for pieces the day after last Halloween.

Many of the pieces were custom made for me, just like they were for the movie. The overcoat was made by a tailor in Great Britain and he did a wonderful job. His coat had the correct blood orange satin and the openings on the back, plus all the correct number of pockets.

The vest was made by a company in California that does Cosplay work. The color of the vest was lighter than that worn by Heath in the movie, but the product was quality work so I could not complain.

The tie was made by an Ebay user and closely resembled Heath Ledger’s tie in the movie. It took me a while to find a pair of pants that matched my coat; I had bought two of them with pinstripes off Ebay, but, when they came to my door, they looked nothing like they did in the photo. So, eventually, I ran across a pair of Liz Claiborne purple pants on sale from JcPenny. They did not have stripes on them, but the color was close enough to my coat so I was not going to fret over a minor issue. I had to hem the pants shorter because they were way too long on me; being women’s pants, the crotch area also hung lower as well.

The hexagon shirt was one made by Tripp. At the time the shirt was the most accurate out there on the market. The gloves were just the cheaply-made, mass-produced ones from Rubies, but they resembled Heath Ledger’s gloves closer than a lot of professionally sewn products I had seen going for close on $80 online.

The wig I wore was one I bought from a local costume shop. The wig was very curly when I bought it, so I wet it and ran a comb through the hair to get it straigther. While the wig was still wet, I put hair gel in to style and ran Rubies Green Cream Makeup on the edges to make the wig look more like Heath Ledger’s hair style. The knife was just a cheap prop I bought from Party City. It popped out like a switchblade, just like the one Heath Ledger carried around, so I was quite pleased.

Also, though they may not be visible in the photos, I had on a pair of brown shoes from a discount shoe dealer, a chain attached to the right side of my vest and a pant loop. I also wore a pair of socks with checkered patterns, although these were not screen accurate.

Finally, I needed the one piece to complete the iconic Joker look: the scars. The prosthetic scars I purchased from Trauma FX looked exactly like those Heath Ledger bore in the movie, and more importantly, was the only set I found that included the third scar on the lower lip.

However, these scars had to be attached with a professional adhesive that made them stick and not come off without a special remover. For some reason, the adhesive would not cause the scars to stick to my face. In the end I had to use Elmer’s glue to get my scars to stay in place the rest of the night. It was quite annoying because, even then, I still had to re-apply glue throughout the day because my hot skin caused the glue’s holding power to weaken.

Overall I was very pleased with the results. I wish there had not been any issues with the scars, but, other than that complication, my costume was a success. A lot of people wanted their picture taken with me and said it was just incredible how much I looked like the actual Joker from the movie. Next year I will either find a better way to adhere my scars or find a better product and, last but not least, find a way to put pinstripes on my pants.