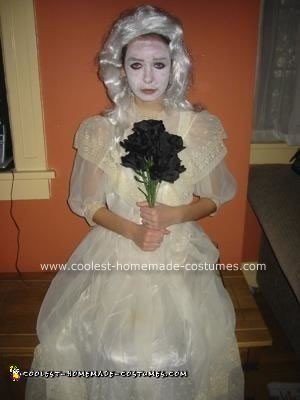 I bought a white wig and a bouquet of black roses. I went looking in thrift stores for a pale blue dress, and I could not find one. It was so frustrating. About a week before Halloween, my mom offered me her old wedding dress. It was a faded yellow color, not exactly what I had in mind, but it worked. Some days, I still can’t believe my mom let me out of the house in that.

I had planned on entering the costume contest, but in the Best Group category, with my school’s GSA. We had planned on being a rainbow, but no one else remembered, so I signed up for Scariest Costume at the last minute. I was up against a really bad-looking vampire, and a really well-done Chucky, complete with his bride in doll form. I truly didn’t think I was gonna win. And when the results were announced, they said Chucky had tied with the Corpse Bride!