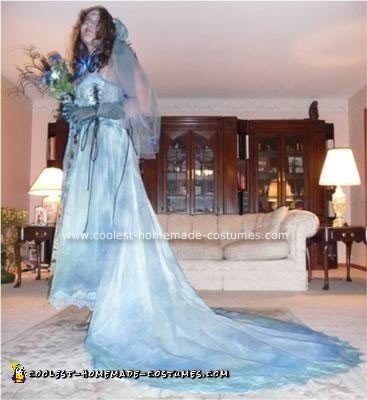 My Homemade Corpse Bride Costume idea was Emily from the Corpse Bride which is a Tim Burton film. The concept would be to make a live version of the cartoon. I wanted something that would be beautiful with a dark overtone. I first started shopping for the dress; the main element to my canvas. I found the perfect gown at Goodwill.

Anyway, I started working on the dress, spray painting the white dress with moss green and royal blue paint. Just a dusting so it would not be too dark. I applied this technique to the veil as well. I also painted the vines on the under layer of the dress with acrylic paint. I wanted to stay as true as possible to the film version. Along with the dress coloring, I also split the seam to show a black under dress (the character has her bones showing in the mid section).

To keep the shade of the dress I created slits up the seam and connected it with a black polyester yarn. This created a corset effect; there are five areas that lace up in the mid section; two in the front and three in the back.

As the costume evolved, I went to Hobby Lobby for the artificial flowers to make the bouquet. I went with cool colors to enhance the effect of the dress. I also purchased ribbon to wrap around the stem for an elegant result. There are little parts of the movie that I wanted to incorporate in the design of the costume.

The veil has blue butterflies attached to it, this represents Emily’s conclusion in the movie. After she resolves her problem, she turns into butterflies and flutters away. Another small addition to the costume was the gloves. I purchased those at the same Goodwill. They are the spider web gloves that turn blue to black depending on the angle. 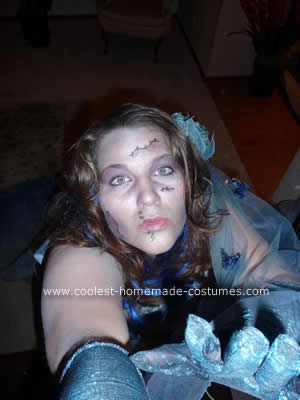 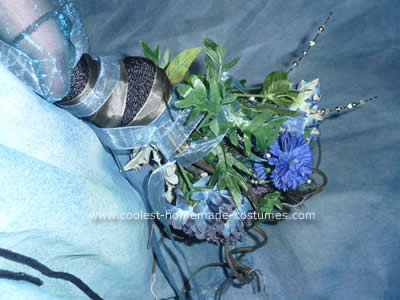 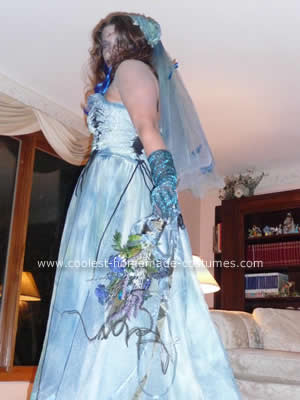