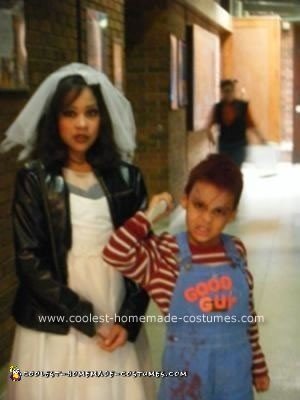 Every year I would buy my kids costumes. Last year with the economic crisis I decided that I was going to make their costumes. I used stuff that I had around the house.

Chucky: I used a striped shirt and a blue pair of old overalls. I used foam letters to glue on the words “GOOD GUY” then I smeared fake blood on the pants. I used some inexpensive hair paint to color the hair red and bought a plastic knife from the dollar store. Finally, I drew some lines on the face with some latex makeup when it was dry and then colored on top of the lines with a red lip liner (this really made the scars look real).

Chucky’s bride: I used an old white dress and removed the top part of the skirt (the tulle). With the tulle I made the veil by gluing it to a hair comb. The dress I combined with a black jacket that I got at a discount store for $7.
My daughter wore black fishnet stockings and black boots. For the makeup I covered her whole face (including the eyebrows) with a foundation that was 2 shades lighter than her skin. I drew on thin eyebrows with a black eyeliner pencil. Next, I used false lashes and lined her eyes with a liquid eyeliner. For the lips I used a red lipstick and applied a little black on top of it to make her lips darker.