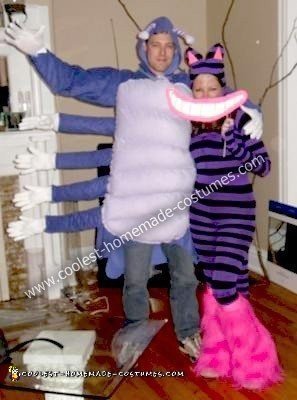 This year for Halloween, my boyfriend and I dressed in Homemade Caterpillar and Cheshire Cat Costumes.

My costume was very easy: I bought 3 pairs of striped tights, one pair I wore as regular tights. With another pair I made a top by cutting a hole in the crotch and holes in the feet for my fingers. I cut the legs off the third pair of tights and stuffed one of the legs to make a tail. I sewed up the top portion to make a cat hat and glued felt on to make the ears stand out. I also bought a pair of pink furry boot covers.

My boyfriend’s costume was a bit more time- consuming. I bought some fabric and polyfill stuffing and sewed on the stomach. For the arms I used panty hose stuffed with the polyfil and used the fabric to sew sleeves around them; I sewed gloves on the ends. I made a hood with the fabric and antennae with pipe cleaners. It was a fun project and we both had people asking us for pictures all night!