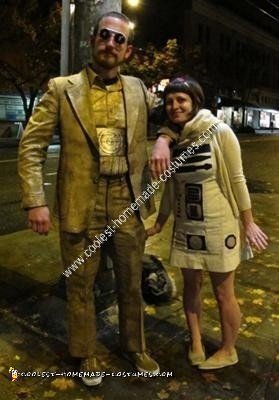 I am Toby and I made the homemade C3P0 costume you see in the pictures. I started with a used 2-piece navy dress suit, and tried a few different types of spray paint. Fabric paint/silk screen spray did not cover very much area, and tended to spatter. The hobby ‘webbing’ texture paints were nice, but also did not cover much area. The combination of the two provided a nice texture to the overall costume. I was hesitant to use an industrial aerosol spray paint, since I wasn’t sure how well it would adhere, or whether it would smell too strong, but I finally picked up a can of Krylon Metallic Gold and it worked very well. The photo of the suit hanging up is pre-Krylon, and you can tell that coverage on the first two spray paints was not very thorough. The Krylon filled in all of the navy spots and gave the overall outfit a nice reflective quality. One can got me through the pants, coat, and front of the shirt, and I hung them up with a fan on in my house and the smell was gone within a few hours.

I picked up a handful of fabric paint squeeze bottles from a local weaving/craft store – silver and brown for the suit details (I had a few photos of C3P0 for reference), and red, blue, green and white for the wiring on the belly. I replicated the details like the next braces, collar, arm braces, codpiece, knees, and back panel with the brown and silver, and a bit of white for added depth on the cumber-bun (which was purchased at a thrift store and worn on the chest, so the belly wiring was still visible).

Jess is the one in the R2D2 costume, and is a skilled seamstress. She used a dress pattern for the basic outfit, and sewed each component based on photos of R2D2. In both costumes, we tried to capture the basic and most recognizable graphic features of each character, but apply them to a more human profile.

And… Jess is about a foot shorter than me, so our characters were to scale :) 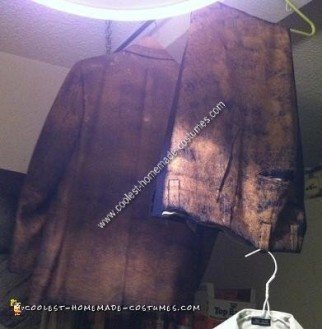 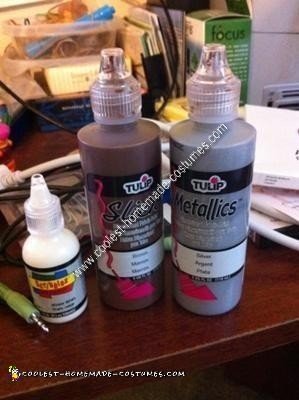 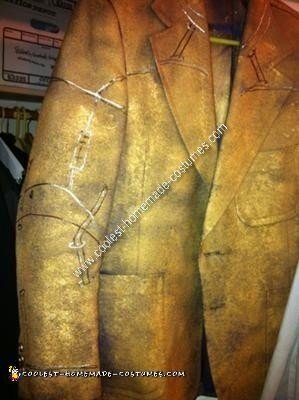 Easy and Mobile R2D2 Costume for a Child