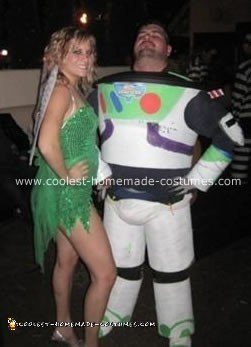 So this is my ultimate Buzz Lightyear Costume!. I used a Heavy Duty Trash can and A LOT of spray paint. Cut the bottom off and a hole through the lid. For the arms I used some cheep knee pads and steel duct for the gauntlets. I stuffed all the limbs with AC foam for a snug fit. The gauntlets were equipped with a working laser and my latch for Star Command housed my wallet and ID for the bars.

The legs consist of Heavy Duty cardboard used for setting poles in concrete. The shoes were just an old pair of lugz that I through some paint on! For the backpack I used the top of a kitchen trashcan and attached retracable wings so I wouldn’t take people’s drinks out with them. The buttons on the chest were wired to an Old buzz Lightyear costume and actually made the toy “commands” when pressed.

By far the best feature was the Karate Chop feature on the back of the Jet back. My friends would punch the back of the costume as we’d hack our way to the bar. People found it too hysterical to be mad and just let us on through.