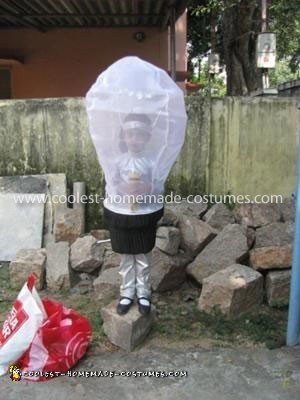 My daughter had a fancy dress competition and the theme was “innovative idea”. So my mind started working. I wanted to build something extra ordinary and something that was not done before. I thought about BULB as I can also make it functional by giving a light torch in my daughter’s hand which she can switch on and off to make it work.

I had to make the shape by using wires. I made the varying diameters of circles horizontaly and then attach the longer vertical lines I needed to weld it together to make it hold in place. Then I stitched a cover for it by using net cloth so that my baby can breath inside. For the holder, I used thermacol and made the shape and cover it with a black wrinkled cloth.

So the structure of the buld was ready , now I had to design the cloth that she would wear. I chose metallic silver colour shirt and legging. I wrote 1000 watts Anam bulb ( as Anam is her name ) and also made filament on the headband. it looked cool and it recieved a lot of applause.

To top it up,my husband wrote a small poem which she can recite on stage. It goes like this:

Switch me ON, Switch me OFF ( here she switches the torch)
I spread light to all across.
Uncle Edison invented me,
In the dark we all can see.
I AM A BULB!!! 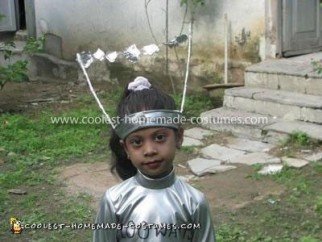