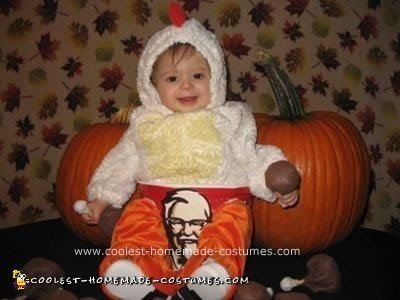 This is my daughter Zoë on her first Halloween. She was about seven months old at the time. During my pregnancy, eggs, and fried chicken were my favorite. It was especially funny as before I was pregnant chicken on the bone in any fashion was something I just wouldn’t eat.

The chicken costume was adorable as is, but then I thought, ‘How about a bucket of chicken?’ I suggested the Homemade Bucket of Kentucky Fried Chicken Baby Costum idea to my husband as a joke, but he just thought it was the cutest idea. My mother-in-law created drum sticks from cut down pencils, felt and batting, and we sat her in an empty KFC bucket filled with blankets and cut-out leg holes. You had to see us at KFC asking for empty chicken buckets in varying sizes- the cashier thought we were crazy!

Zoë had a slight cold in these pictures but she loved to ham it up for the cameras, and was such a good girl letting me pose her for multiple shots.