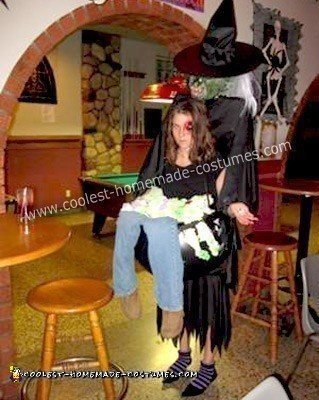 The Homemade Brewing Witch’s Caulderon Costume is a witch brewing me in her cauldron. I bought a witches mask from a store and the black witches gown. I bought a cheap backpack and cut off the one side. I duck taped 4 cardboard poles together (from the inside of wrapping paper) to make the witches frame and attached that to the back pack (I liked using the cardboard poles because they weren’t very heavy on my back).

In order to make the cauldron look like it was bubbling over I bought foam insulator and neon colour paint from the Dollar store. I cut out the shape of the cauldron with cardboard (with holes for the fake legs and for my body) and placed tin foil over the cardboard. I attached a bunch of Styrofoam balls to the tin foil. I also attached some battery powered lights to the tin foil. Then I sprayed the foam insulator to make the appearance of the cauldron bubbling over. The lights gave it a really cool affect in darker rooms!

Since I had a bunch of eye balls in the cauldron I decided to buy a patch and some fake blood to cover one eye to make it look like she stole my eye ball! This was a last minute addition!

As a suggestion I would not wear a black tshirt, if you wear a brighter colour you can really distinguish yourself from the witch (even in the dark!)