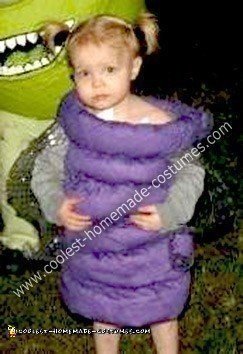 For “Boo” I wanted to make her in the Homemade Boo from Monster’s Inc. Costume that she wears when they sneak her into the factory. We purchased purple fabric but it was not shiny so we got a shiny purple netting to go over top. We found a clear shower mat with circles on it and suction cups to use for the arms and a Tupperware container to use as an internal structure for the hood.

I bought a Dollar store old style mop to use for the hair, black pipe cleaners and Styrofoam balls for the eyes. I made the front by adding tubes of batting in-between two pieces of fabric and whip stitching in-between the two rows to give it the effect of a puffy jacket (the kind you would see in the 80’s). I made a tube of fabric stuffed with batting and attached it around the top and did not stitch it to the other row all the way leaving slits for arm holes.

I realized that I had not compensated for how much adding the padding would change the width of the fabric so I had to add a panel in the back so that it would fit my daughter correctly. This actually worked out better because I would be able to make the armholes stay open more by adding an extra row in the back in-between the top and the second from the top. I made each tube individually and then sewed them to the front panel and to each other. If I were more experienced I would have added a zipper.

After I was done , I cut arms off of an old gray sweatshirt and sewed them to the inside of the costume. I cut the shower mat to look like tentacles and sewed it to the sleeves. I covered the Tupperware bowl with fabric after first cutting a small hole in the top of it. I cut a slit in the fabric so that I could thread the mop hair and the two pipe cleaners through. I added more purple fabric to the eyes for eyelids and coiled a black pipe cleaner to make the pupil. I had to twist two pipe cleaners together to make them strong enough to hold up the eyes.

I had to make more fabric tubes to attach the hat to make it a hood. I added about 3 to make it work like a hood. I should have gotten a bigger bowl so that it would be really floppy on her head. I also added white felt triangles to look like teeth on both the hood and the neck area.

This is definitely a cold weather costume. If it wasn’t so warm out she would have worn purple pants under it but since it was so warm we let her go without any pants.