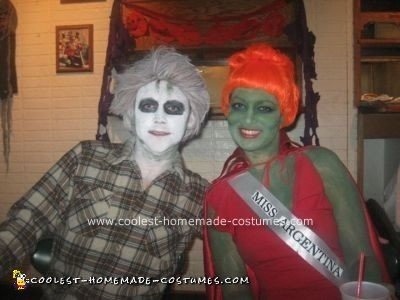 My husband and I wanted to be something original this year, not the ordinary store bought costumes that you see everywhere. Plus we wanted a couples costume so, given the criteria, it was a fairly difficult task. We starting searching online and looking in stores until we finally had come across a single Beetlejuice costume with the black and white suite.

We thought that a Beetlejuice Couple Halloween Costume Idea was fantastic, however we did not have anything that resembled the suite. Since we were pressed for time I started Googling Beetlejuice couples costumes, clips from the movie etc…. just to try and get more ideas. Finally I came across a picture of Miss Argentina and Beetlejuice together off of this very website. We immediately fell in love with the idea. I printed out pictures of both characters from the actual movie so we would have a reference to go back too and started making a list of what we needed.

For the Beetlejuice costume my husband had found a old shirt that was his grandfathers, he wore that with a pair of dockers and bought a wig, white hair color and black, white and green Halloween make-up. The hardest part was probably the wig, we actually had to buy a Donald Trump wig and alter it. We cut all of the bangs off and hair sprayed it so it would stick up, then sprayed it with white hair color and let it sit over night, then repeated the steps again the next day. He covered his whole face in the white makeup, then made black circles around his eyes and used a sponge to pat on the green around the sides of his face and neck.

For the Miss Argentina costume there was a little more effort. I was lucky enough to have already had a red dress that I wore for prom when I was in high school. That was the start, then my mother in- law had made a cape one year for a different costume and it just happened to work out perfectly with the collar and all. Next was the wig and sash, I bought a roll of ribbon and printed out letters that read Miss Argentina, I then stapled the letters to the ribbon to make the sash. I colored all of the staples with a black sharpy marker so you couldn’t see the shine of the staple.

I bought an orange bob hairstyle wig and decided to put it up since her hair was up in curls in the movie. I actually did make a couple curls and bobby pinned the rest to give the illusion of a up-do. After that was the make-up, I bought your basic Halloween make-up in green, white, red and blue; I mixed the green and white for my base color that went on my face, arms chest, back etc then used the blue for my eyes and to contour my face and chest. The red was used with the white for the slit wrists. To top everything off I painted my nails orange and wore red lipstick with orange lip gloss.

Both me and my husband used a powder brush and cornstarch and covered all makeup to set it and that worked perfectly. My make-up stayed on the entire night other than what had been rubbed off by the cape and my husband had no problems with his. We were greeted by lots of people through the night getting compliments and taking pictures with them. Most knew who we were but some of the younger generation weren’t to sure until they saw Beetle Juice with me. I would say it was all worth it!

We had a blast with our Homemade Beetlejuice Couple Halloween Costume Idea and are still getting compliments on our costumes. 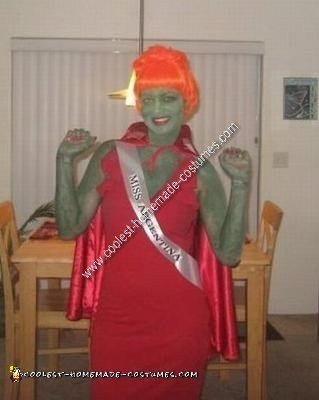 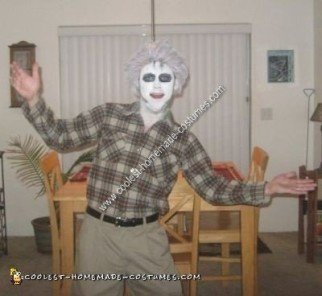