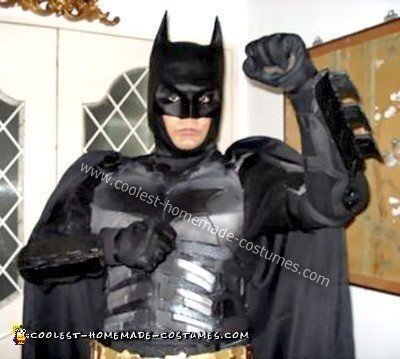 I made this Homemade Batman Dark Knight Costume for an office Halloween costume competition. I did it in about 4-5 days, out of things that were already lying around the house. It’s basically made out of colored rubber puzzle mats, a yoga mat, biking elbow and knee paddings, biking gloves, cardboard, 2 rolls of black duct tape and plastic shopping bag (for the cowl), tons of hot melt glue, spray paint (2 cans flat black, 1 gold and 1 silver), discarded bag straps, some Velcro straps, old rubber boots (the one you use when wading in flood waters, cut them up and duct taped together so it became a better fit), and an assortment of black clothing (biking jersey, arm warmers and leggings.

The only thing I had a friend sew was the cape. Pictures from the internet were very useful, specially for the cool toy line from DC direct and hot toys. It was a first attempt at costume making and will probably not be the last, it was fun making it but doubly fun seeing the expression of the people who saw it and could not believe it was done in less than a weeks time.