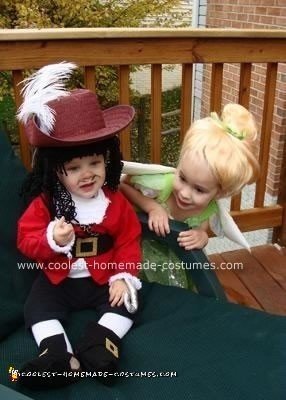 My daughter was dressing up as Tinkerbell, (which was a store bought costume), and I desperately wanted to have her brother in on the “Peter Pan” theme. I could not find a baby costume for a 12 month old (that wasn’t bunting), so I decided to make my own Homemade Baby Captain Hook Halloween Costume.

I used a hand-me-down white turtleneck and sewed a couple of layers of white ruffly trim to it.
I took one of my son’s shirts and used it to create a pattern for the red coat. I added a diagonal piece of black and gold trim down the front of the jacket with fabric glue. I added more of the white ruffly trim to the sleeves. Captain Hook needs a hook but I know my baby won’t hold on to a toy hook all night, nor will the took hooks I’ve found be the right size for him anyway. So, I cut out a hook from silver fabric and created somewhat of a pillow which I stuffed with paper towel. I then sewed the “hook pillow”, as I call it, to the inside of his left sleeve. This way it rests on top of his hand and he doesn’t have to hold anything.

I made the belt out of a large piece of elastic measured to fit around his waist. I sewed it together as on piece so no actual fasteners would be needed (he would just pull it off had I used Velcro to fasten it if I gave him the chance). I cut out a rectangle out of glitter foam and hot glued it to the elastic to give the appearance of a buckle.

Then I used an old pair of black jogging pants and hemmed them to fit more like pantaloons. I just put on a pair of white socks and rolled them all the way up his legs.

For the shoe covers I used a piece of black felt. I traced around his actual shoe and used that to create the sole of the cover. Then I sewed the remaining felt to the sole, and then flipped the leftover felt over to create a boot look. I easily slip these covers over his shoes. I glued another rectangular piece of glitter foam for the shoe buckles.

The hat was an old straw cowboy hat we had in our dress up trunk. I used burgundy acrylic paint to cover it. Then I hand stitched one side up and hot glued a plume in between. I also added a piece of nude color elastic to the hat so that I could keep it on him for more than 5 seconds.

For the wig (which was the most time consuming) I used black yarn which I cut, and knotted at the top, into 6 strand sections. Then I dipped the yarn in fabric glue and wrapped around some dowels. I then covered a baking sheet with foil and baked the sections for 20 minutes on 350degrees F. which hardened the yarn into curls. I hot glued the curled sections to an old black winter hat.

I had great fun creating this costume and I only spent $20 to do it!