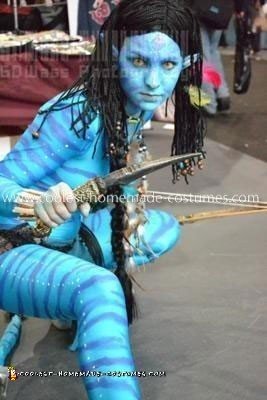 The Homemade Avatar Costume took a year and three attempts to perfect.

I began with a blue lycra bodysuit, and my college textiles department generously gave me a tub of fabric paint that we mixed together to create the right colour, and then my long-suffering friends painted me in the suit in the bathroom while I stood very still for a good few hours.

I first tried braiding a wig myself, but ended up buying a pre-braided wig, to which I added my own wooden beads and a feather hairclip, and the queue was made from two black plaits attached together, and some lengths of pink wool were added to the end for the Tsahaylu bond.

The tail was created with extra blue lycra and the last of the fabric paint, and then some black fluff attached to the tip, which was then sewn onto the suit. The ears were purchased from a joke shop and customised with blue acrylic paint.

The loincloth was made from a cheap cushion cover and a black belt, and I added various accessories including a mixture of boys wooden jewellery and beads. I created the herb pouch using an old curtain tie and added extra beads and coloured it with copic markers.

Finally, I used a mixture of traditional makeup and face paint to finish my look, and a pair of yellow Avatar contacts to top it all off.

The knife was shop-bought, but then later customised with paint. 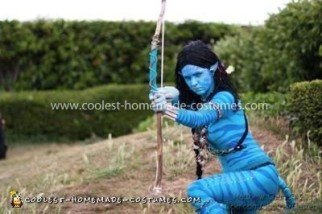 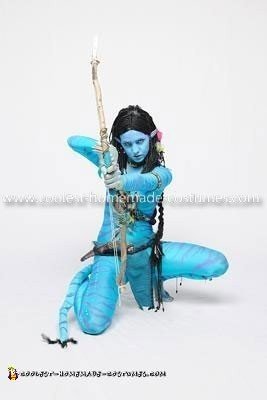