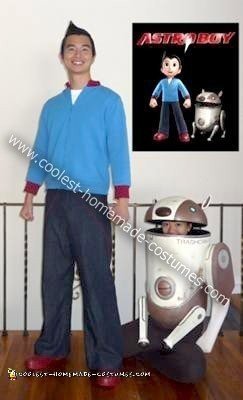 These Homemade Astro Boy and Trashcan Costumes were the first year we decided to actually make our own Halloween costumes. When we saw that there was a new movie about Astro Boy (a Japanese cartoon icon) coming out the week right before Halloween, we decided that it would be perfect for us to go with an Astro Boy themed costume. We knew my husband would go as Astro Boy and we thought it would be funny if I went as Trashcan the dog.

The Astro Boy costume consisted of a zippered coat, bell bottom jeans, red boots, and of course, the spiky hair. I had to make the entire outfit from scratch because I couldn’t find anything that was the correct color or size. For the coat, I bought blue fabric that matched the color of the zippered coat that Astro wears in the movie. I used one of my husband’s hoodies as a template to trace out on the fabric. I then just cut and sewed the pieces to make the jacket, and added a zipper. Red fabric was sewed onto the collar and cuffs.

I bought jean fabric and again, used one of my husband’s own jeans as a template, but widened the legs to make bell bottoms. Once I had finished making the jeans, I sewed on a red strip of fabric to recreate the red stripe. For the boots, I took an old pair of shoes and spray painted them red. My husband wore a white shirt under the blue coat and we spiked his hair with a ton of gel and lots of hairspray. By the time I was done, his hair spike was rock hard!

The Trashcan costume was a little more difficult and I had to come up with some creative techniques. I used a lot of thin cardboard (like the kind from a cereal box) and duct tape to create the body and the two curved domes for the head and bottom. For the domes, I cut out thin strips of cardboard and taped them around a large bowl. Once I got the basic shape, I used duct tape to cover and reinforce the entire thing. I used more cardboard to make a large tube the same diameter as the two domes and attached the domes to the top and bottom of the tube. I cut a hole out of the bottom dome so that I could get into the costume and two holes out of the tube for armholes. I only attached the top dome in one spot at the back of the costume, so that it acted as a hinge and the costume head could open and close.

Once I got the basic shape made, I used lightweight plaster over the entire thing, and once it dried, I sanded it to make it all smooth. I formed all the accessory pieces (ear, nose, stomach bolt) out of aluminum foil and again used lightweight plaster to make the pieces appear smooth. The arms were also made of cardboard and I cut out small circles for the accents on the arms. The front arms had two small Christmas balls attached to the cardboard so that they looked like wheels.

Everything was spray painted to match the correct colors and I used regular acrylic paint for all the detailing work (the Trashcan logo, the rust, etc.). I lined the inside of the costume with black felt so that you couldn’t see any of the duct tape. The final touch was having the eyes actually light up by using two small flashlights shining through colored turquoise paper. I wore an ivory shirt and attached the arm pieces to the shirt with Velcro, so that I could remove the arms easily. Dark colored tights made my legs sort of blend in to the ground.

I’m a stickler for details and trying to make things look as spot on as I can, so these Homemade Astro Boy and Trashcan Costumes took me longer than it probably would have for most people, but I’m happy with the results. The costumes weren’t too expensive to make. I spent about $40 for all the fabric and materials for both costumes. Time was the biggest factor. It took me about two weeks to finish both costumes, but it was fun and definitely worth it.

Everyone loved our costumes and thought it was hilarious. They were amazed that I actually made our costumes and I got so many compliments on what a great job I did. And for those of you wondering, I did stay in my costume the whole night! It actually wasn’t as uncomfortable as it might look. I could move my arms freely and sit, so I was all set. I hope you all enjoyed seeing our costumes as much as I enjoyed making them!