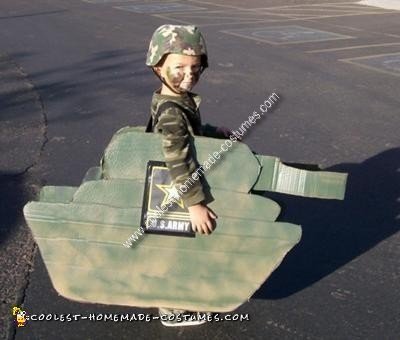 Our 4 year old loves everything army and wanted to be an army man driving a tank! We loved that he wanted to be actually driving a tank and so off we went- with the help of cardboard boxes, duct tape, paint and some imagination his homemade army man in tank costume was created!

It was fairly easy (and inexpensive!) to do – he already had all the army clothes and hat… and had some army face paint left over from his army birthday. The costume was easy to put on and take off and light enough to wear for a long time. We cut out 2 tank shapes from cardboard and glued them on to the side of a cardboard box which had been cut to fit over his head and rested on his waist, we attached straps to the center box to go over his shoulders to hold it up.

We painted the whole thing with green, black and brown paint to make it look camo. We added the words army by printing it out off of the computer and then taped it on with black duct tape. You can even buy camo duct tape at Walmart. So fun!

He even won a trophy at school for best costume in the parade!