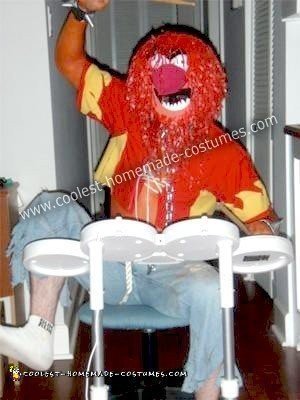 Another one from our Homemade Animal Muppet Halloween Costume this year. This one took hours to put together. Again, supplies came from thrift and dollar stores, so you can do it cheap if you’re willing to put in the time.

For the head:
I cut the rim off a baseball cap to use as the base. I then covered it in fabric from an orange tshirt. The eyes are a large craft Styrofoam ball cut in half and hot-glued on. The nose was cut from a large piece of foam and covered in fuschia felt. I used black feathers for his characteristic bushy eyebrows. The hair is a couple red/orange cheerleader pompoms cut up and hot-glued all over the head.

I cut the jaw and teeth out of cardboard, covered it in the tshirt fabric to get it the right colour, and sewed it to the hat.

We made his spiky neck and wrist bands with cardboard and duct tape, and bought a few feet of thick chain to attach to the neck. An old pair of jeans got shredded and tied up with a thick rope belt. The signature shirt started as two tshirts, red and yellow, which we cut apart and re-sewed into Animal’s crazy rocker tshirt, tied together with rope.

A few tubes of body paint from the dollar store finished it off- we painted his face black for inside Animal’s mouth, and his whole body bright orange!

Our Muppet costumes were the big hit of the party all night, they had a blast!