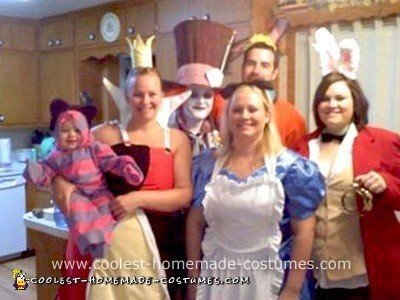 Our group decided to go as the Alice in Wonderland party. We had The Cheshire Cat, The Queen of Hearts, The Mad Hatter (Tim Burton’s version), Alice, The Tea Party Rabbit and, of course, our Late White Rabbit (who is really late, by this we mean pregnant).

Our Homemade Alice in Wonderland Group Costume was made by The Queen of Hearts. She put the most time and effort into the project, while The Mad Hatter helped with his costume.

The Queen’s costume was all handmade from pieces of material that were sown together and some 16- gauge electric fence wire was used to make the bottom springy. On the back of her there was a smile of the Cheshire Cat.

The Cheshire Cat was also, from head to toe, made from spare material.

The Mad Hatter’s costume took, perhaps, the longest. The Hat was 100% constructed using cardboard, poster board, material, feather duster feathers, knitting needles and some 16-gauge electric fence wire. The suit was an old green suit that we spray-painted lightly with purple spray paint. The belt across the chest was just spools of thread woven with yarn on an old belt.

Alice’s costume was an old blue dress with a white apron sown on top.

The Tea Party Rabbit used a few colorful shirts and handmade ears that the Queen of Hearts constructed.

The White Rabbit had a lady’s red overcoat. We took a foam circular ball, glued cotton balls onto it and then pinned it to the back for a tail. We also found an old clock and tied it to yarn to hang from her neck (so she wouldn’t have to hold it all night).

All in all, we had the time of our lives and everyone loved our costumes.