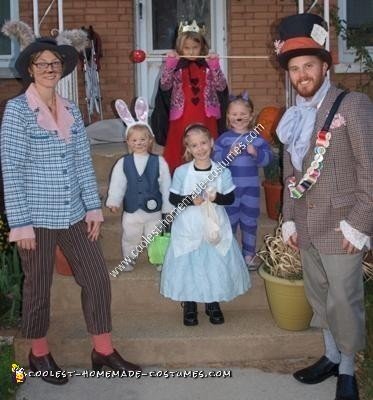 We like to go as a family theme for Halloween. This year, everyone agreed on Alice in Wonderland. From oldest to youngest, my children dressed as the Red Queen, Alice, the Cheshire Cat, and the White Rabbit. I dressed as the March Hare and my husband was the Mad Hatter.

To make the White Rabbit and Cheshire Cat, I started with a simple QuikSew pattern for a one piece, footless pajama. I simplified by skipping the button or zipper closure step and substituting an extra half inch to the back seam and using ribbons to tie it closed.

I used white fur material for the White Rabbit and a thrifted blue vest. To make the pocket watch, I used an old makeup compact and glued a watch face to the front. I used a purchased bunny ear headband. (I had also made a red bow tie but my toddler refused to wear it!)

For the Cheshire cat costume, I used two shades of purple fleece, 1 yard each, and cut them into strips 2 inches wide. I sewed the strips together in alternating colors and used the Quik Sew pattern for the costume (adding a few inches to the legs for my taller 4 year old). I made a tail using the striped fabric and hot glued some triangles to a black headband for the ears. Some eyeliner whiskers were applied and she was ready to go.

For Alice, I used a blue dress that we had in our dress up box and sewed in a white pinafore using 4 yards of tulle. I used an eyelet fabric to create an apron. White tights, black shoes, and a black headband completed the Alice costume.

For the Red Queen, I picked up a red dress at the thrift store. I sewed black felt hearts to the dress and created a simple black cape using 1/2 yard of black satin material and a length of black ribbon. To make the staff, I painted a Styrofoam ball red and added stick-on heart decals. We attached it to a wooden dowel. The crown was purchased at the costume store for $6 and we used red lipstick to make the heart lips. (The sweatshirt she is wearing is not part of the costume. It was cold!)

For the march hare, I thrifted the pants, blouse, and jacket. The striped socks were $1 at Target. I thrifted the hat and used wire and fur material to make the hare ears.

For the mad hatter, we purchased the hat at the costume store. I added the fabric band, the flowers, the feather, and the tag that says “In this style, 10/6” (using a square of manila folder, and a lighter to singe the edges). The clothes were thrifted. For the jacket, I added the lace around the cuffs and the flower to the pocket. To make the arsenal of thread, I used embroidery floss to string together 15 spools of thread. I then used a leather belt cut in half and attached the thread to the belt. It buckled in the back. A long strip of fabric was tied in a bow for the large bow tie.

These Homemade Alice in Wonderland Costume Ideas took me about 2.5 months to assemble. I spent probably 24 hours sewing and gluing and maybe 6-8 hours at various thrift store looking for just the right patterns.