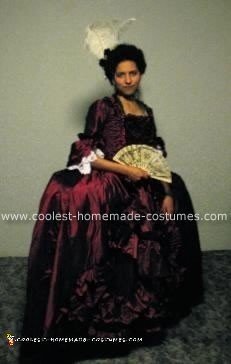 This is a “homemade” costume, one which is a little complex in structure, but overall isn’t complicated in sewing technique. The costume was made by using historical patterns from 1750-1760, resized to fit my own measurements. The costume constitutes a total of 10 layers, which you can’t see under the gown itself but which are in various places that help to give it’s authentic 18th century look. Each layer is made using period correct fabric – the gown is pure silk taffeta, and the under layers are starched linens.

This was a very popular gown that would have been seen fairly often from 1730-1760, cuffs in the earlier years and flounces later, and enlarged to extreme widths for the higher aristocracy. It existed into 1780, mingled with other styles, and until 1790 would only be seen as formal court dress for the monarchy.

There are numerous names for it: “contouche”, “Watteau”, “sack” or “sacque back”, and “robe à la française”, which translates simply to Dress of the French, reflecting the strong influences that country had in terms of fashion and art. It features long pleats in the back, a very ingenious application that, through some lacing within the lining, made it a “size fits all” kind of gown: in other words, it could accommodate for the wearer if she gained or lost weight, just by tightening or loosening the laces.

Common decorations (for those who could afford it) included bows, ribbons, flowers, pearls, and rich embroidery in gold and silver.

Because there are so many layers (each requiring it’s own special attention), it took me an entire year to make it in preparation for Halloween. I think that it was well worth the effort!