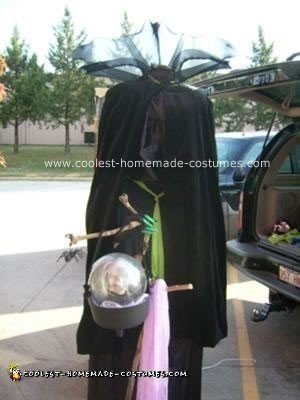 You’ve seen a headless man but have you seen the witch that carries her head in a caldron? We went to the Halloween store and got a little inspiration. There was an ugly witch head in a glass ball that gave us the idea. We decided to do a headless witch Halloween costume but have her carrying her own head around in a caldron.

We bought a heavy piece of foam at the hobby store and cut in into a shape of neck and shoulders. Then we cut into the center of it and I stuck my head in it. Next came a very thin XXL turtleneck that I was able to see out of that covered the foam, a large bra and my head, making the torso and neck of the witch. Sewing a really long skirt was next.

Then the velveteen cape with lime green lining. The cape had an upper part around the neck to look dramatic of sheer material over wire. I borrowed a stick from my nephew who loves to collect walking sticks and added the witch head in the caldron. We made a belt with two poison apples on the end of the belt and a spider hanging from the stick. I did buy the witch gloves.

It took awhile finding a way to make it stand straight on my head but the two inch foam did the trick.