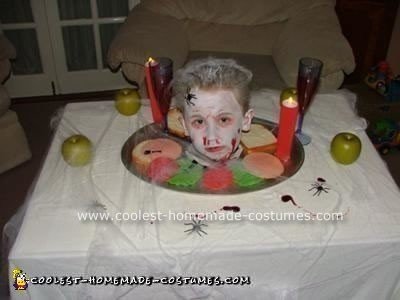 My son Benjamin wanted to stand out from the crowd for Halloween. In the U.K Halloween isn’t as great as in the U.S, so we had our work cut out!

We used a large flat box given to us by Asda (Walmart) over which we draped a tablecloth from the local charity shop. Both of these had holes cut in them large enough for Benjamin’s head to pass through. The platter was an old tin one which first had a hole cut in the centre to fit snuggly around Benjamin’s neck. A section at the back was then cut out so that the front could be placed under his chin and the back was then added behind his head. The sharp edges were made safe using the electrical insulation from electrical cable.

The whole effect was then finished off with make-up, fake blood and the ‘table’ and platter were dressed with glasses filled with raspberry jelly set in the fridge, LED candles, spider web and rubber toy food and apples. He made such an impression on the local community that had ended up in the newspapers!

Total cost of the head on platter costume was: £5