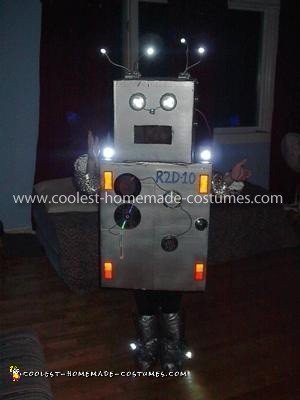 Last year my daughter and I wanted to make a really cool handmade costume for her and decided a robot was the best way to go. I didn’t know where to start so I went online and found this website which really gave us some great ideas, so I wanted to come back and share the pics of our “epic robot costume” to hopefully inspire some other parents.

We started out this Handmade Robot Costume with 2 big boxes which I first spray painted black, then silver to fully cover the print on the outside of the box (it took a few coats of each). In the bigger box we used foam padding between the box and her shoulders. This was a lifesaver during the 2-3 hours we spent trick or treating because the costume was so heavy. We used dryer vent tubing for the arms, of course.

I used the my hot glue gun to put the reflectors on the front and back of the body, and from there started gluing on the thermometers and some “gauges” I had drawn on the backs of blank CD’s, such as “Candy Levels” (low). I also glued a mirror and the top of a sugar dispenser to the front, and I later put a glow bracelet inside the dispenser top so it glowed green out of the holes of the dispenser. I also made letters identifying our robot as R2D-10, combining R2D2 with my daughter’s name, Dayton. Hey, we’re dorks and we’re okay with it.

On the back of the body of the costume we cut a hatch, simply because I thought it would be really cute. Inside was a picture from one of her favorite movies with the phrase “Deploy the Yak!” underneath. No one else saw this movie so it was our own inside joke. If anyone else reads this and gets it, you are a cool individual. Also on the back I stuck some more wire, and decided to glue the bolts on the back in a way that clearly served no purpose whatsoever, just for fun.

The head was the most fun to make. I used tap lights for the eyes (put fresh batteries in first!), then used a multicolored flashing light that I had scavenged out of one of Dayton’s toys for the nose. I used the tops of salt and pepper shakers (2 for a dollar!) on the sides of the head. It’s not shown in the pictures but I later lined the mouth and the front and back outline of the body with glow sticks, which you have to do right before you go trick or treating or they lose their glow. I had taken the book lights and spray painted them silver (cover the actual light with masking tape first), and I glued them to the top of the head as antennae.

I used a styrofoam circle used for making floral arrangements, cut it in half, sprayed it silver, and carved out enough space to cover one of the bright, LED flashlights I found at the Dollar Store, and did that for each shoulder. For her feet, I took last year’s snow boots and covered them in duct tape. I attached a flashlight to each foot with duct tape to round out the look. It’s not shown in the picture but I also covered an old pair of her sweat pants with duct tape. Finally, I took a long length of wire and shoved one end through the body and one end through the head for that authentic robot look. We were stopped over a dozen times by other parents trick-or-treating to take her picture, and she was the star of her school’s costume parade. The only problem is trying to top it this year. 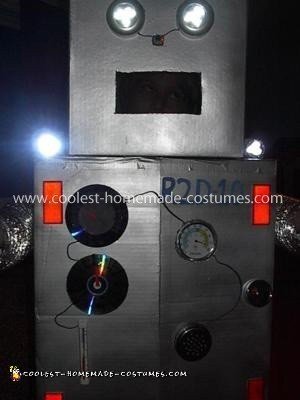 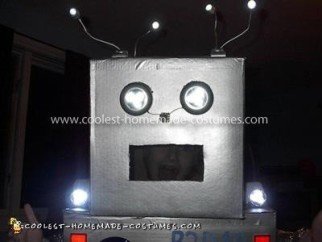 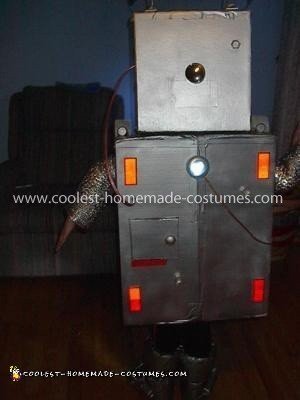