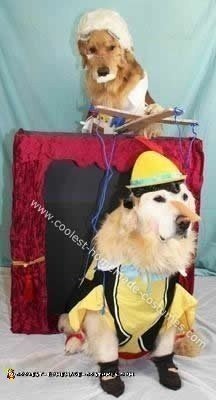 Phoenix is Gepetto, the puppeteer, and his real little boy Pinocchio, played by Aladdin, just wishes he didn’t have any strings. Gepetto is manipulating Pinocchio’s marionette crossbar with his paw so he can help him put on a show for Halloween before Pinocchio’s nose grows too long.

For the Pinocchio outfit, we also bought a yellow alpine hat and decorated it with a blue band of satin ribbon and a red feather. We added a vinyl wig underneath so he would look like an animated character. We bought a plastic Pinocchio nose intended for a human and glued it together to make it flatter, so it would rest on his snout. We tied on an elastic string in a loop, and glued on circles of pink felt on either side of the string for cheeks. We used very light thin elastic, so the dog would be comfortable and he hardly seemed to feel it. We also made him shoes out of old brown socks. We cut them very short and cut a hole in the center. We then glued on tan craft foam, filling in the hole, to look like the foot showing through the hole in the shoe. We also added a strap from the extra sock material with a white button. The socks worked well because they stay on his paws much better than real shoes would. We made his marionette crossbar out of foam board, which we painted to look like wood, and added blue strings, which we tied to his costume.

For the Gepetto costume, we bought a white wig and eyebrows. We hung the eyebrows with string off the wig, so they would rest above his eyes. We also put an elastic loop around the moustache to hold it on. We bought square spectacles, just like the real Gepetto wears. We also used an old kiddy tool belt and decorated it to look like Gepetto’s belt with a sign saying “Toys by Gepetto”. We tied the tools inside so they wouldn’t fall out when the dog moves.

We also made the stage that Pinocchio is supposed to be performing on. We used a carton, which we cut out most of the front of. We then painted the inside black, and glued on velour material with creases in it, to look like the curtains on a stage. We glued on gold ribbon for ties and red tassels.

Hope you like our GePETto and his PUPnocchio Costume.