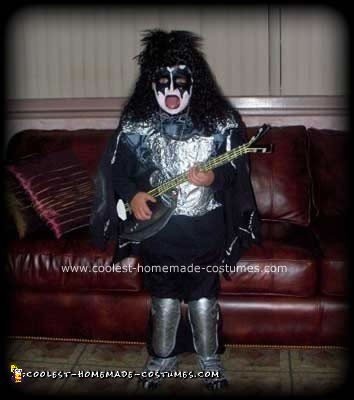 My son won first place with best costume from the entire pack at our cub scout pack night. His picture was also featured on genesimmons.com in the ‘your letters’ section and on our pack website.

Ever since I met Gene Simmons my son has been in awe with him. He wants to be a rock-star when he grows up. We figured him being Gene might be a good start.

The make-up I ordered online from the KISS warehouse. The wig, I also ordered and trimmed it to work for my son. The axe guitar was trimmed out of thin wood. Then I painted it to match Gene’s.

For the chest my son has an ATV so we just used his chest protector covered in aluminum foil. For the shins I used shin guards and cut paper plates to look like scales then hot glued them to the shin guards and spray painted them. I used an old pair of sneakers and spray painted them to look like the dragon. I got a spiked collar from the Halloween store as well. He wore all black and was quite a hit everywhere we went.