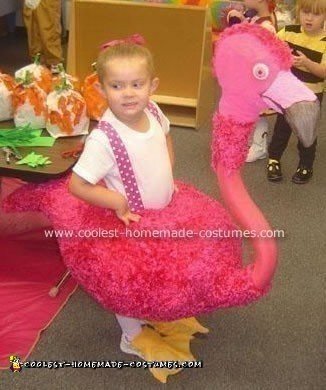 My niece goes to a Christian school and their theme for Halloween was Noah’s Ark. So you had to come as an animal. Well my brother is a very creative Dad and he wanted her to be an animal no one else would go as. So he asked her what she wanted to be and she said something pink and so a pink Flamingo costume it was!

Body: He took a pair of her shorts and sewed (yes he sews!) sheet to the bottom of them all the way around the legs and to the top all the way around. He left the back open and left some extra sheet for the tail. He then stuffed the sheet with Pillow foam very full until it took the shape he wanted of the body. He then stuffed the tail and shaped it as he stuffed. He attached wide polka dot ribbon to her shorts to go over her shoulders to hold the costume up. (he sewed them so they would be secure)

Neck: he used a noodle that you use to swim with at the pool and placed a copper wire in it and shaped the neck. He attached it to the body,

Head: He sculpted the head and beak out of Foam and painted it with foam paint. He made the eyes out of play-doh and glued them on. He made the feet out of yellow foam and felt. He then found that pink fuzzy soft material and sewed it on in strips to cover the body and also to cover the areas where everything was attached together. She could just step into the costume and step out.

My niece was the hit of Noah’s Ark!