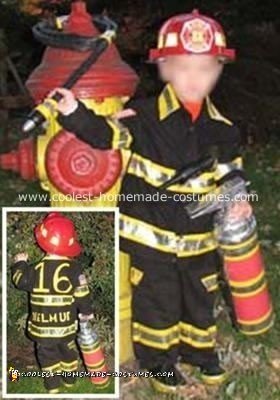 My 2 year old son is infatuated with firetrucks and firefighters. He has 2 of his very own volunteer firefighters in his family, so coming up with an idea for a fireman costume was fairly easy for him!

I went in search of the perfect costume, only to find cheesey ones in the stores or I would find a really cool one but it was over $60! I refused to pay this for one night’s use of a 2 year old’s costume, so I went searching online to find ideas. I found this site and was inspired.

I went to Walmart, as someone suggested and found a toddler boy’s 4T shirt (my son wears a 2T normally but I wanted it to be big enough to look like a jacket and also allow for heavy clothes to be worn underneath in case it’s cold for trick or treat). I then found a pair of black “cargo” sweat pants. Then we headed to the hardware section of the store and found metallic silver tape and yellow duct tape.

Then off to the craft section for the American flag patch. That’s all I ended up buying for his costume. He already had the “helmut” as he calls it and a badge sticker from a tour of a local firehouse. The boots, he already owned, they are actually his rain boots. I put the tape around the entire shirt and each pant leg as well as the pockets and collar and we were done!

We wanted something original and clever for his treat container, so we decided on a fire extinguisher. My husband found a clear plastic cylinder with a lid, that he had at work from popcorn or something that came as a freebie from an office supplier. We took red construction paper and lined the inside (we didn’t want it to get wet if it rains) then on the outside repeated the tape pattern as we did on the costume.

For the top, I went to a craft store and purchased a giant clothes pin for $1. My husband attached it to the lid of the container with a valve from an air compressor clipped in it for the nozzle. We then covered the entire thing with the silver tape…and voila, we had a perfect fire extinguisher treat container! We also had an old hose in the yard that was being thrown away, so my husband cut a small section off of it, attached a nozzle to it and we wrapped it up in the yellow and silver tape too, so my son could throw it over his shoulder. He looks like a real fireman!

We can’t wait for his 2 relatives that are firemen to see him, we know they will be so proud and will love it! We took him trick or treating the other night at an early trick or treat night at a local mall and his costume was the talk of the mall, especially the fire extinguisher! So many people stopped us, including the people who were handing out the candy and asked us how we did it and if I made it and how it was their favorite one all night! We’re pretty proud of it, our son LOVES it and after Halloween he can wear it again for dress up…and if need be, I can always pull the flag decal off and the tape and he could actually wear the clothes, too.

Best of all, my total cost was under $15! The most expensive part? The duct tape! I hope this inspires others, I’ve had an absolute blast and my son loves it!