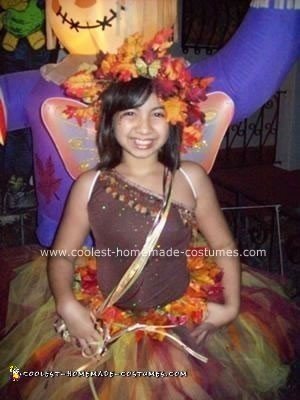 I was so tired of all the hoochie costumes that were out there for preteen and teen girls so I decided to try my hand at making my daughter’s costume even though I know nothing about sewing.

My daughter wanted a fairy Halloween costume so I decided to buy a lot of fall stuff since it was already at 40% off in some stores and make her a beautiful tutu skirt and decorate and brown leotard that had fall colored halograms on it. I also made her the head piece that had streams down the back and could be tied to fit any size head.

The tutu skirt was made with about 200 yards tulle in yellow, gold, orange, brown and burgandy. I also added silk fall leaves around the waist of the tutu and feather butterflies on the tutu and on the headpiece. And though you can’t see it in the picture the skirt had gold glitter sprayed on it thanks to spray fabric adhesive glitter.

When we went trick or treating she had her picture taken several times by moms who just loved her costume.