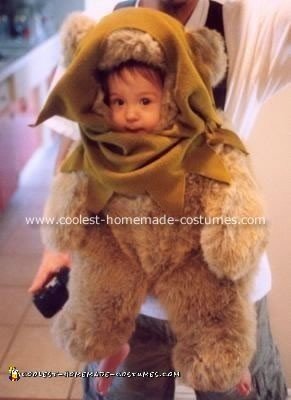 For my daughter’s first Halloween I was adamant that she not wear a stereotypical store-bought baby costume. No bugs. No flowers. No pets. No, she had to wear something different. Something original. Something cool. And as with everything I try to make, it had to not only look good, but be functional as well. And since my daughter was only ten months old, she was certainly not capable of walking house to house.

So I took our Baby Bjorn, a big teddy bear, and an old elf costume, and created a costume / baby carrier that any true Star Wars fan and parent should appreciate.

I started by cutting a line down the back of the teddy bear from the back of the head to the legs, and then across the back of both legs. This allowed me to remove the stuffing, and to open it up so as to cover the baby carrier, and I attached it with diaper safety pins. I cut a U shape from around the teddy bear’s face, so the face could be stuffed inside the head to provide a soft surface for the top of my baby’s head. I cut open the hands and feet of the teddy bear, so that my daughter could move her hands and feet freely as she wore the arms and legs of the teddy bear over her own (but that’s my big hand there, not hers). Then I placed the tunic of the elf costume over the teddy bear’s head, with the neck being the opening for the face, and the arms being the openings for the ears. And just like that, my daughter was an Ewok.

Since it was attached to the Baby Bjorn, it was easy to get my daughter in and out of, it wasn’t restrictive, and it kept her warm. It got such great reactions from people that my son wore the costume four years later, and I still have it hanging in my daughter’s closet. The best, and easiest, costume I ever made. 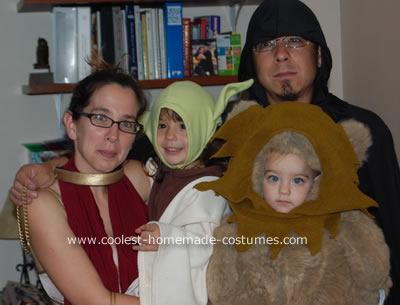 Last Halloween we got lazy. We bought a Yoda costume for my daughter. My son wore the Ewok costume/baby carrier I made four years ago. My wife wore the Princess Leia Slave Girl costume I made for her five years ago. And I turned my homemade Darth Maul costume into a “Jedi Council Member # 6” costume. My wife hates keeping things that aren’t used all the time. She calls it “clutter”. I call it “instant Halloween”.