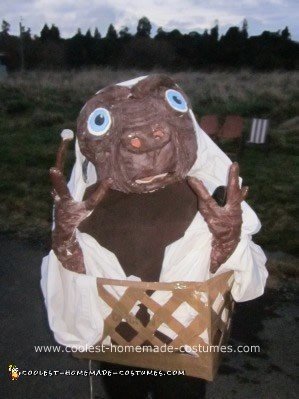 This homemade ET costume was made from a paper mached rugby ball. I did about 3 layers of paper mache and let it dry over night. After it was dry, I cut the ball out from the bottom and backside. I added a piece of cardboard to the front for stability and that helped to shape the mouth and nose.

For the nose, I used a cardboard egg shell carton and looked through that when the costume was on. In order to bring out the features of the face, I rolled plastic grocery bags and put heavy packing tape on top of it, taping it to the paper mache. The plastic bags were especially important for the structure above the eyes. Next, to have the ET facial wrinkles, I used thick string and hot glued around the contours of the eyes and mouth. After that, it was time for lots of brown paint and to make the eye balls out of cardboard and paint.

Once the mask was done, I made the basket that ET rode the bike in. It was not as robust as I wanted, but was running short on time. Any type of box would work, just so long as you can cut bits out to make it look like a basket. I stood inside it, had rope underneath for make shift suspenders and then wrapped a white sheet over my head and let the extra hang out in the basket.

I used a heavy fabric to make the hands, put some brown paint on it to match the face and then place a red glow stick in at the top of one finger. When I tipped my finger one way, the gel from the glow stick would pour forward and it would light up red, ET style.

It was a pretty creepy costume but super fun to make! 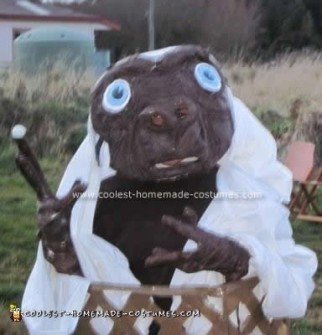