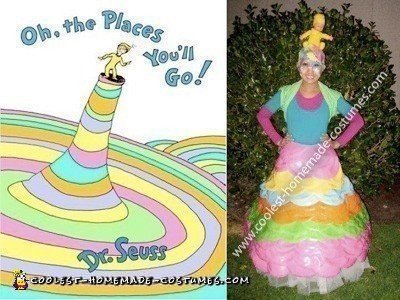 Halloween is my absolute favorite holiday and every year I try to be creative and come up with something unique and fun. I usually start brainstorming months in advance and start collecting materials in September or early October. This year I knew I wanted to take inspiration from Dr. Seuss’ “Oh, the Places You’ll Go!” because I love the book and the cover art is awesome. I looked through tons of pictures of the cover and the book pages and decided that I wanted to recreate the book cover in costume form.

The Skirt: I started with a poofy petticoat ($15) from the wedding section of a thrift store. This was my most costly item, but I knew the base of the skirt had to be huge in order for it to have the right effect. I was also going to need something rounded to build the stripes on the book cover’s hill, and I wanted to use a material that I could get cheap, in large packs, to minimize costs. Paper plates seemed like a good option for this.

I used about 7 packs of plates, which were about ($0.97) a pack. I cut the plates in half and popped them inside out so the colored sides were convex instead of concave. This was key, so that the plates lay nicely on the body of the skirt. I used a hot glue gun to adhere the plates to the skirt while it was on my body (I don’t have a dress form lol).

Once I got about halfway down the skirt, I threw it over a rolling office chair and used that as my ‘dress form’. I also sewed Velcro to the back seam of the skirt so that it would stay shut, since the petticoat was drawstring, and would otherwise have a big gaping hole in the back.

Top: I made the lime-green shrug out of a large shirt I bought at Michael’s for ($2). I cut the neck of the shirt off and sewed the neck shut, so the old bottom of the shirt became the new neckline and bottom of the back of the shrug. I rolled the sleeves and pinned them in place. I layered the shrug on top of a long-sleeve magenta shirt and a half-sleeve turquoise shirt, both of which I already owned.

Hair/doll headpiece: I twisted my hair in sections and pulled it into a bun. Since I have dark hair, I sprayed all of it white, using colored hair spray (about $2/can). Then I sprayed the rainbow colors on top of the white. The doll was a ($0.10) item from the thrift store. Since I don’t currently have a sewing machine, I covered him in yellow duct tape so he would match the boy from the book.

For his hat, I rolled a piece of newspaper into a ball and taped it to his head, then covered it with duct tape. I folded a strip of duct tape and taped it to the rim of the hat to make the bottom hat-fold. Next I duct-taped a pencil to his back for stability, and stuck him into my bun. I used fishing line to wrap his arms and legs and stabilized him on my head.

Face: I drew out the outline with yellow eyeliner first, then filled in with facepaint. Then I primed my other eyebrow with white eyeliner and filled it in with pink facepaint. I used eyelash glue to adhere the jewels on my face, just to add dimension to the look. Then I applied purple eyelash extensions. Finally, I painted the words “Oh, the Places You’ll Go!” on my face.

This was so much fun! I loved seeing people’s reactions, especially when they recognized the book :) 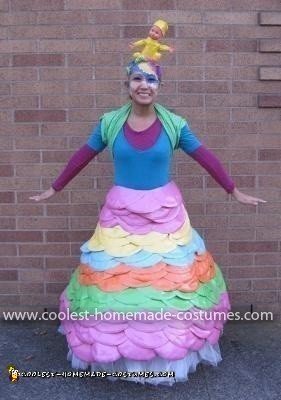 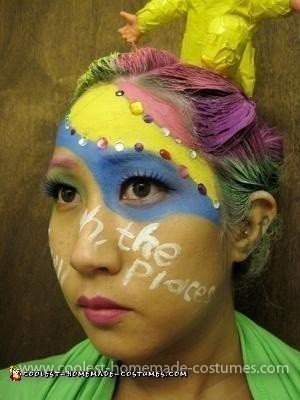 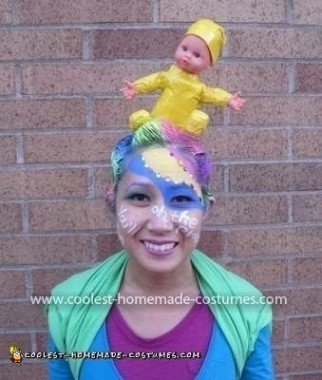