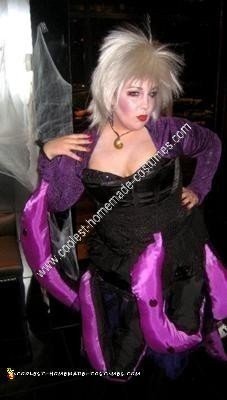 What do you do with seven old bridesmaids dresses!? Take one and make it into tentacles!!!!!! Brides always say “oh sure, you can wear it again for sure!” well I decided this year I had to wear one again!!!!!

The DIY Ursula from The Little Mermaid Halloween costume idea could be made, but I knew it was going to be a serious process! It started with cutting large triangular shapes into a long black skirt I wore last year in a wedding in Nashville. I spent hours cutting and sewing bright purple fabric to the skirt as well to create the underside of the tentacles. I used large sequins for the “sucker” part.

After making much of my squid like skirt I decided my best friend should go as the evil Flutasum and Jetsum! Then began stage two… I lucked out and found snakes at a local toy store that moved and wiggled and lit up and made scary noises! amazing! so I took them apart and fashioned them into eelish shapes :)

Once I got that down, I had to work on my own costume again and figure out a way to attach my tentacles upright. I took fishing line and attached it so when I walked it looked like I was swimming!

My Halloween night was great!!!! People were belting out the words to “POOR UNFORTUNATE SOULS!” the entire night! NYC became filled with the Disney spirit! It was a blast! 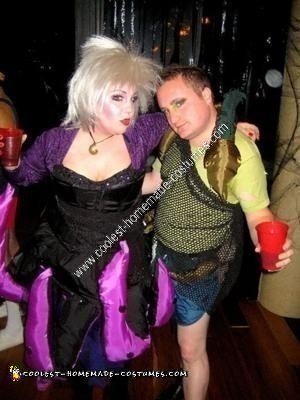 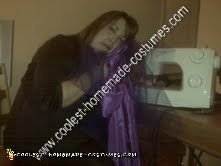