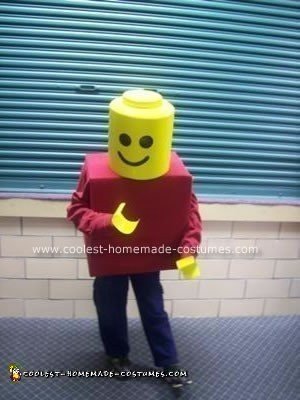 Well, my son is 9 years old and completely obsessed with Lego. Everything in his life all comes back to Lego, that is all he talks about… so when he told me he wanted to be a Lego mini figure for Halloween I wasn’t surprised. We looked online and saw a few ways to make the head but they were all for adults (and seems so difficult).

So having a father like I do, I made the head out of foam insulation sheet, (1 inch thickness) and cut out rings and the top piece I didn’t cut the middle out of it. I hot glued all the rings together and then I used bondo and plastered that stuff on. When it dried, I sanded it down and it was so nice and smooth. Cheaper and so much easier than using the resin that most of the sites suggested. When it was dried we used a good quality primer and paint. And it still took 4 coats to cover it properly. It looked so good. I also got a scrap piece and used it for the small piece at the top. I wanted to write Lego on it but he didn’t want that. I think it would have looked better! And I would have hand painted the black letters on the top too!

Then I was lucky enough to come across a box at my friends church that was perfect size and shape. It was a toilet box, they were replacing their toilets to the taller toilets for the seniors. I was pretty lucky. That box was a little too long so I shortened it using a box cutter. I re-taped the edges and cut out the bottom of the box for his body, the top for his head and the sides for his arms. I just guessed and estimated for the head and arm holes. Doesn’t have to be exact. No one saw the holes anyway.

Then I got an XL red men’s turtle neck from goodwill and it fit snugly over the box. I hot glued the shirt on the inside of the box on the bottom and then used packing tape to make sure the glue didn’t come through. The shirt was good because it covered the whole box and he was still comfortable. He could use his arms and move freely. I used a grits canister to do his hands. I cut the canister in 3 strips. It was the perfect size. I painted them and 2 toilet paper rolls and when they were dry I hot glued them together.

(Can you tell I LOVE my hot glue gun?)

He just wore a pair of his own jogging pants and black running shoes. He won prizing and the news paper even took his picture. He was thrilled. The only problem is next year trying to top that! 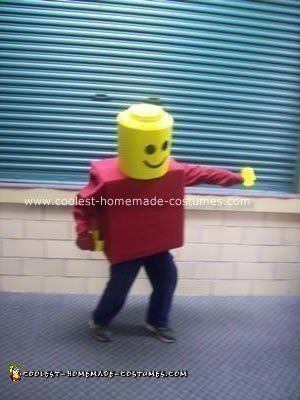