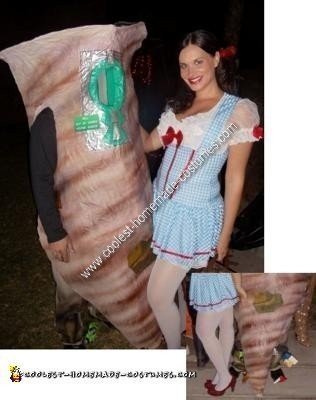 The Dorothy costume was store purchased with custom ruby red slippers made with glitter and bows. The basket was added along with a little dog from home.

The Tornado was fabricated out of a chicken wire frame covered with paper maché. It was painted and air brushed, then accessorized with photos from the movie (the flying witch, Gulch on the bicycle, the men in the boat where across the back) all scenes that Dorothy saw through the window from inside the tornado. We also took the audio from the scene in the tornado as the items are flying by and Dorothy was yelling for Auntie Em. This played from an ipod nano and small speaker just inside the top of the funnel.

We also added some farm toys and cows hanging from the bottom of the funnel. The port-hole was made to look like the one in the first scene at the Emerald City. Dorothy and company ring the bell only to find out that it is out of order (“Who rang that Bell?!?”). It had a door that would open allowing me to see out of the front. The bottom legs of the pants had a picture of Dorothy’s gate and the house from the movie imprinted on them with more airbrushing to show the destruction flying up around the tornado.