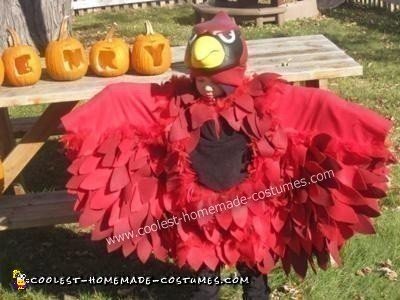 We started by looking for a bird head. We found the foam cardinal head at a rummage sale for a decent price and went from there. I took an XL fleece and sewed a crotch and leg holes into it and then put elastic around the leg holes. Next I added the black fleece for the bird tummy.

I sewed wing shapes of fleece to the sleeves and sides of the fleece and then began sewing the feathers on one at a time. I did a row of feathers and then a row of boa (which I purchased at the dollar store). We bought black tights for the legs and I made black shoe covers for his feet. He was very excited to be a red bird and loved flapping his wings from house to house for treats :)