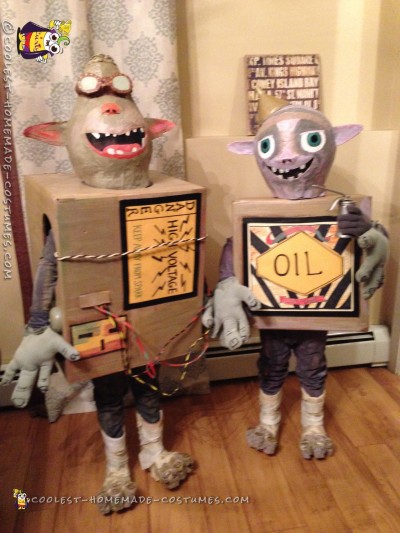 Here’s how these Boxtrolls costumes, Oil Can and Sparky, came to life for Halloween. Halloween is and always was my favorite holiday and I think I have passed on my love for it to my two children. We aren’t fans of the store bought kind so when summer ends and school begins we start to think of what we will be for Halloween. We usually try to give ourselves a solid three weeks to build a costume. We should definitely give more time, but with work, homework and after school activities…that is all it allows.

We were huge fans of the Boxtrolls movie when it came out. We saw it opening day in the theatre. That same day we went to our local library and rented the Boxtrolls novel. It was a lot different than the movie, but I read it out load over the next few days to my son who was 7, and my daughter 5 at the time. They both enjoyed it immensely and didn’t want to stop reading.  It definitely had all of our interest.

This was long before we even started of thinking about Halloween or costumes at all. When we got close to the end of the book, we saw some of the sketches of the characters. We saw the movie again and that is when our ideas were sparked. My daughter said she loved the Oil Can character and she really would like to be him for Halloween. Then my son said “Mommy, really? How are you going to do that?!” I replied, “I’m not, Daddy and I both will!” That is when he said he really liked Sparky’s character, especially because of the wires.

I knew I wasn’t going to be able to find anything close to resembling Boxtrolls costumes, but I ventured out to a few stores anyway. I knew I needed some under clothes because it’s always a cold and sometimes a wet Halloween here in New York. That day I bought two sets of long johns, stretchy gloves, and different kinds of sample paints. I got home and discussed with my husband how we were going to possibly pull this off..lol. He suggested we do paper mâché heads and said his Dad made him Pink Pather back when he was a kid. But he was too young to remember how.

He left for work and that’s when I googled paper mâché recipes. I came up with one and didn’t like the smell so I added cinnamon too the mix, to mask the scent. I used a balloon for each head to start and went to layering. We made the thermal long johns look worn with paint. My husband created foam hands and sewed them onto the stretchy gloves, and we used rain boots for shoes and laced bandages and foam feet over the rain boots. As a team we collaborated on painting the faces.

The body for the Boxtrolls were heavy cardboard boxes that we painted to reflect both Boxtrolls characters. My husband put screen over the mouths inside the paper mâché heads so our kids could see. That was it, Sparky and Oil Can were born.

These Boxtrolls costumes were a hit at the kids school parade and everywhere we went trick or treating. We didn’t do any costume contest with them this year, because they all were too soon before we finished the costumes. Our kids both had a blast being these characters and thought it was really cool that nobody knew who was inside the costume at school. :) 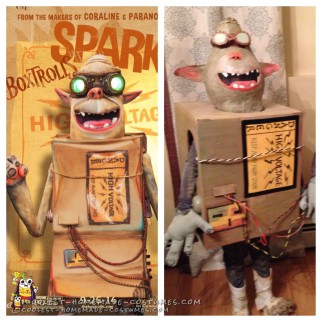 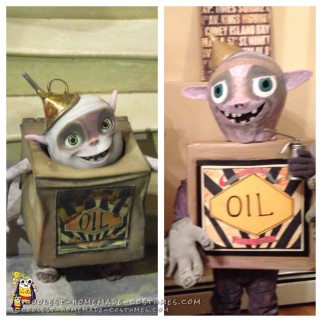 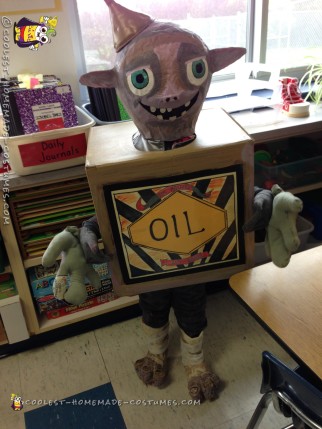 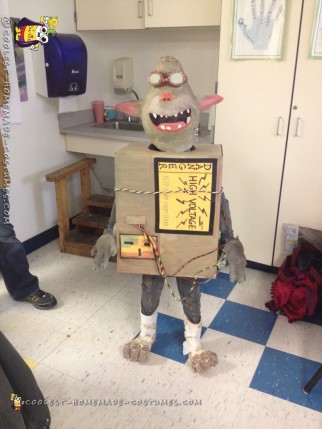