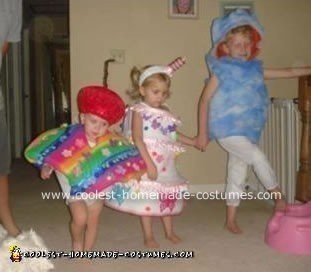 I wanted my kids to have a theme, and we chose dessert. My son is Owen 6, and he wanted to be BLUE cotton candy. My daughter Charlie is 3 and wanted to be a birthday cake. The baby is 1 1/2, and she was a cupcake. I wanted to make this as cheaply as possible.

For the swirl hat, I bought a plastic pumpkin bucket for 25 cents from a thrift store. Anything would work as long as it would fit on his head because it would be covered with “fluff”.

I took an old shirt and hot glued and sewed fiberfill to it. I hot glued this same fiberfill to the hat. I spray painted it bright blue, and my son wore his white tee ball pants as the stick or cone.

It was a great hit although a lot of people tried to eat him.

I knew I needed this to be lightweight as my daughter is only 3 and about 30 pounds herself. I have never made any costumes before, but I thought it should work like those collapsible hampers. So I found 3 circle shapes at the dollar store. The top tier is a picture frame from a mirror; the 2nd tier is the edge of one of those plastic platters; the third is a round laundry basket.

I took those items apart leaving just the hoops. i hot glued fabric around those hoops and then stitched them together. We added items for decorations from the fabric store both sewn and hot glued.

To top it off, I made a candle headband out of an old toilet paper roll and a battery powered tea light. She was the hit of tonight’s Trunk-or-Treat.

So, my baby is silly and cute as can be. why not make her a cupcake. I used chair foam ($1) at goodwill, fleece type fabric and embellishments. I used an old snow hat for the Cherry, and for the Cupcake’s bottom an inverted lampshade also ($1) from the goodwill.

I hot glued old fabric with a hole for the head onto the lamp shade so we could slip it over her head. The cupcake top was the chair cushion with a slit in the middle for her head. I attached it to the lampshade as well, and the whole costume fit over her head.

The cherry hat had some foam on top of the hat covered with fabric and a pipe cleaner stem. If I did it again, I would have left the cupcake bottom a little longer as she kept playing with it because her arms could reach it.