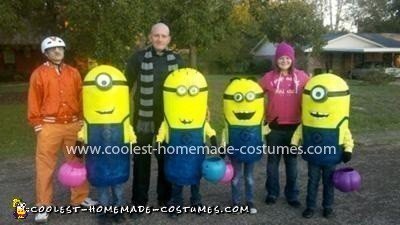 We care for four girls at a children’s home and we wanted to dress up in a theme for Halloween. Our own daughter suggested we dress up like Despicable Me characters. I immediately had an idea how to make the Minion costumes for our girls.

I started with two 24″ beach balls and taped them to the ends of a piece of poster board that I wrapped around both of them. Next, I mixed flour and water to make a paste to make the shell out of paper mache. I visited the local newspaper and obtained old, unused newspaper. I ripped the newspaper in two to three inch strips, and began by painting on a layer of paste with a three inch paint brush followed by a strip of paper.

Then I painted paste over each strip. I added about two layers to the poster board that I planned to leave in place when the shell dried. I figured the poster board counted as a few layers. Over the beach ball that I designated as the top, I pasted about three layers of news paper; alternating the direction of the strips.

On the bottom beach ball, I extended only three and a half inches past the poster board to create a curve on the bottom. I finished the paper mache shell by using white computer paper as the final layer to make it easier to paint.

After the shells of paper mache had plenty of time to dry, about two days, I deflated the beach balls and removed them. I trimmed the bottoms for a clean finished edge, and I sketched on the overalls, eyes and mouth with a pencil. I tried the costume on the girls and marked where the arm holes needed to be and determined the “eyes” of the minion would be a good location for the “peep-holes” the girls needed to be able to see out of the costume.

For lack of finding what we needed, I bought Krylon yellow fluorescent spray paint for the top half, blue spray paint for the overalls, and black pipe cleaners for the hair. I made the goggles out of pint and quart size plastic paint pails, all materials from Wal-mart. I cut out the bottom of the pails and cut them to fit the contour of the shell of the costume. I painted them with a dark grey metallic spray paint.

We got a lot of complements for this Despicable Me Minion Group Costume while we were out trick or treating, and many of them were “those are the coolest costumes I have ever seen!” In keeping with the theme, I shaved my head and dressed like Gru, my daughter dressed like one of the little girls from the movie, and my son dressed up like “Vector”.

We had a lot of fun even though it took me 32 hours (including a few all-nighters) to make all four costumes for one and a half hours of trick or treating. 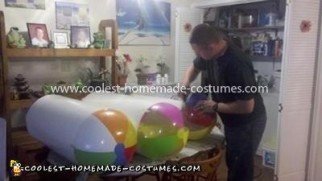 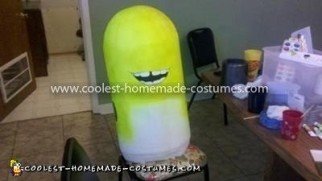 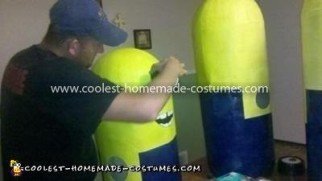