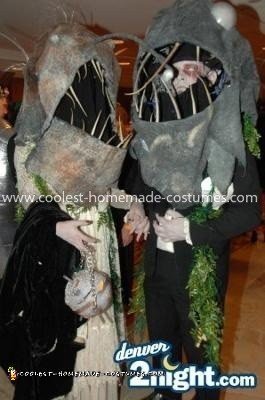 I really wanted to be something scary, but that people could identify with… Something that actually exists right here on our planet, 3000 feet below the surface of the ocean!

I decided first that I wanted it to be BIG! These fishes in reality are quite small, but I thought maybe if I blew up the size a bit, I could make it look really creepy!

After much thought on how it should be constructed and after scouring the thrift store for ideas, I realized the sturdiest option was starting with a construction helmet. I found my helmet at the Goodwill in downtown Denver. The basement was already filling up with costume ideas, but the only thing that I found was a construction helmet and a grass skirt (aka seaweed).

The next step, a frame. I decided that wire mesh would be much sturdier than chicken wire and much lighter than paper mache. My boyfriend drilled holes in the helmets and ran pieces of threaded metal rod and attached them with nuts, bolts and washers. We then sculpted a frame in the shape of an angler fish and a fangtooth fish from the wire mesh and affixed the sculptures to the metal rods. (see pics)

Next we used leather scraps found from a fabric store that was distressed and soaked them in hot water. When they were removed, they were easily stretchable and sculpted nicely over the frames. I use temporary pieces of thin wire to hold the shape as the leather dried. Once dry, the leather was treated with paint, a slight shimmer and leather glue to hold it’s shape…

Next I sculpted teeth individually from Sculpey clay and baked them. Each tooth was treated with silver paint, a glaze and even one gold tooth was added to the fangtooth costume for extra comic effect! Last, the teeth were sewn and glued to the frame.

Later we added LED’s to both eyes and the lure to make them light up!

All in all both fish helmets took two weeks to make and about 60 hours! We are very proud of our creepy deep sea fishes!

Thank you for your consideration!